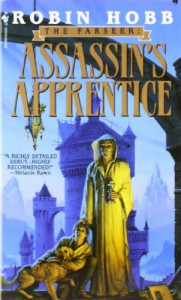 As you can probably guess by my rating... I adore this book. There's something very comforting about the writing that just grips me each time I read it.

I love all the characters even though all their names are silly. The main character, FitzChivalry, and all his friends, mentors, and enemies... the emotions behind all those relationships are so beautifully written that you can really feel the connections Fitz has with them.

This book is not perfect. Still, each vital ingredient that is necessary for crafting a wonderful book is present. I just always want more. I'll try to explain...

It is really short for an epic fantasy and some of the world building suffers because of this. The setting is what you'd expect from this genre and the magic system isn't ground breaking. Yet, I still love the choices Hobb made with her magic system and tying it in with the worlds own mythology and history. The magic is shrouded in mystery which, I suppose, makes it all the more interesting. There isn't much exploration of the Six Duchies, but the places that were part of the adventure were great. This is mostly because the writing is so good that you don't even have to try to imagine... it just happens.

The beginning also starts off weak. You have to really try to suspend disbelief while Fitz recounts his earliest memories.

This is an obvious hint at Fitz being an unreliable narrator that many might not pick up on the first read.

Another issue early on is time. There isn't a clear picture on how time is passing until you are told that he is finally thirteen. Seven years go by without many markers (besides seasons) and so it's a little unsettling. This section doesn't last long and these minor concerns don't continue as the narrative launches into the meat of the story.

With assassin as part of the title, some might expect lots of actual assassinations to take place. They don't. This book deals with the internal struggles of becoming an assassin as well as external conflict surrounding the kingdom (raiders and a zombie-like weapon) and the politics (power moves) of said kingdom. It's a coming of age story and so we see Fitz change as he acquires new knowledge/skills and we see him stick to his principles regardless of the struggle he faces to remain loyal to his kingdom. These internal and external conflicts are so well balanced, very fulfilling.

The ending is surprising in how different it is played out. I won't spoil anything here except to say that I love it when things don't go exactly how you would hope or expect. Things are tied up nicely even though there are a few topics that are left in mystery or that hit an unexpected roadblock.

Such as the resolution with his relationship with Molly.

Effective in leaving you wanting more. There's not a single moment of boredom in this book even when there isn't massive action... the writing is that good. Compelling to the very last page that I even stayed up past my bedtime to finish the last 10% this time around.

Even with these faults, I'm sticking to my rating. This is a book that every fantasy lover should read at least once. The other books in these trilogies aren't as special but are still worth reading because they are good (3-4 stars, IMHO). I won't be re-reading the entire series just yet... but I do plan to over the next year or two to get up reviews and refresh my memory before diving in to the new Fitz and the Fool trilogy.

Recommended for those who love character development... and animals! :)